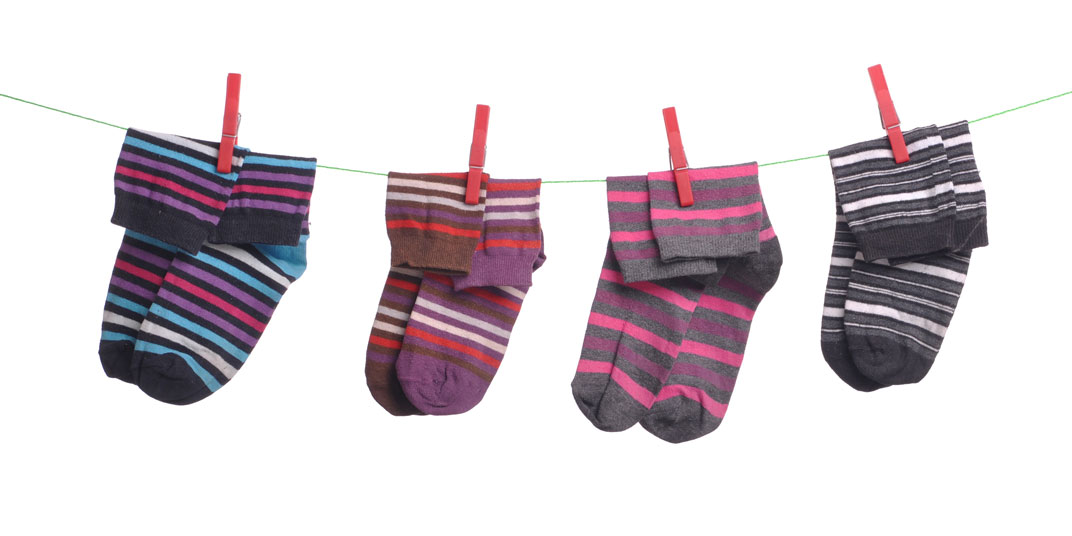 Unlike working with regular straight needles, working in the round simply means you go around and around your knitting without the need to stop and turn your work. When you work with straight needles you are knitting across one row and then turning your work to either purl the next row or continue knitting all rows depending on the pattern you are following. You then continue like this back and forth until you have finished your work. The work looks flat.

However, for something like a sock or a sleeve you don’t really want to have to work flat as you’d have to do a lot of darning work and who wants to do that. So working in the round allows you to continuously keep knitting around and around making a seamless tubular piece of work with no gaps or holes (fingers crossed) that you have to sew up at the end. The other great thing about working in the round is that you don’t have to worry about the purl rows as these are automagically made as you go. The knit stitches will be on the outside of your work and the purl stitches will be on the inside of your tube. Ingenious!

I’ve talked a lot about knitting with four or five needles and unfortunately could never really master that way of making a sock. I could handle it well until I reached the dreaded heel flap. I seemed to get confused which needle was which even if I used stitch markers so there had to be a different way. Enter the Magic Loop method and the technique just clicked.

Once I discovered the magic loop method of knitting my sock making ability suddenly took off. OK, the first sock I made wasn’t perfect but I turned it into a Santa Sock which hung proudly from the bedroom door knob. There were a few holes in the gusset but I finally had a piece of knitting that if you held up and asked someone what it was they would definitely say, “that’s a sock”.

The Magic Loop method reduces the number of needles required down to two which are attached together by a length of cable. (Fig ii) Instead of having to divide your stitches across three or four needles you cast on the amount of stitches required in your pattern and then split those stitches evenly across two needles by bending the cable in half (Fig i) and pushing each set of stitches down each individual needle. The needles will both be facing right and the loop of the cable will be hanging to the left of your cast on stitches.

Once the stitches have been divided you need to join them in the round. A useful video explaining how to do this can be found here.

Divide the stitches evenly between the two needles

Pull out the back needle and knit normally. When you reach the end turn your work and keep working around and around.

Thanks to creativeknittingmagazine.com for the
magic loop example pictures

All there’s left to do is to follow your pattern but casting on with the magic loop is only the tip of the iceberg and that sock pattern still looks daunting . You may have successfully cast on, managed the cable and be ready to start but lets breakdown the Anatomy of Sock Knitting, what each part of the sock is and which order they need to be tackled.

Find out more in my next article: